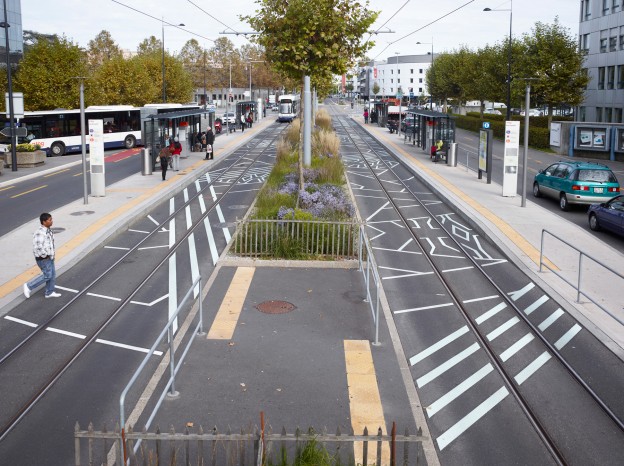 Silvie Defraoui is spreading her artistic work out over three successive tram stops on the territory of the commune of Lancy, Quidort, Petit-Lancy and Les Esserts. Her contribution is in three acts, like a film sequence forming three instalments in the work of an artist, who was a pioneer of video. The only difference here is that it is not the picture that is moving but the viewer, using the tram.

In reconnoitring these locations, Silvie Defraoui was unable to escape noticing the intense visual bombardment that we are subjected to in these places where we pass through and wait, since they are extremely cluttered with furnishings, signage and advertising. That is what gave her the idea of devising a proposal to offer the eye somewhere to relax, to take a visual stroll and to escape.

Silvie Defraoui has observed that in the city, at tram stops, most of the people look downwards “probably to take a rest and to let their thoughts have free rein. In the countryside people look up at the clouds floating by”. That led her to develop geometric drawings produced in the paint that is used for road markings, such as “tapis sur asphalte” (“carpet on asphalt”). These crisscrossed lines, some more dense than others, are not to be read like a still picture but like a labyrinth network, which the eye can follow and in which it can keep on losing trace of where it is.

The artist explains that it was the ground that grabbed her interest in these places where people wait, where the horizontal lines guiding movements – the white road markings and the pedestrian crossings – constitute a sort of language of official instructions to be obeyed, whether it be in a car or on foot. That gave her the desire to create a counterpoint, an interval of freedom using this same language. There is nothing subversive to it, she says, just a small space free from constraints, a tiny niche to escape to, which takes hold of the eye and allows it to wander somewhere else.

She expresses the will to do a simple job of work, not to impose anything but to create something reminiscent of the beauty of the ornamental work on the flagstones in more southerly cities, whereas in Switzerland the ground gets neglected.

This installation spread over three locations also answers an expectation formulated by the commune of Lancy: that of identifying its territory through visual recognition. The artist strove for unity in variety for these three tram stops. The projects are different while maintaining the same characteristics, namely three levels of motif in three thicknesses of line forming all together a “song comprised of different verses”, to quote the artist herself.

The work moreover fits in perfectly with the use and experience of public transport, which she perceptibly transforms. A thought during a waiting moment, the eye perambulating ahead of the traveller, although it is also still possible to discover the work while travelling by tram too.