The Bernex site marks the transition from town to countryside and opens up on a very uncluttered and verdant landscape, forcing the gaze to look further afield.

The Lang/Baumann intervention is going to be located right next to the tramline and is to be targeted on both the users of public transport and the Bernex residents. It is to be integrated in a project known as “Parc Agro urbain Bernex Confignon”, for which a competition was held early in 2013. The award-winning project envisages landscaping the site and including an educational aspect too, dealing with the development of market gardening.

Beautiful Bridge concentrates several functions in a single object with a purified design somewhere between sculpture and architecture. The work takes on the elegant yet sylphlike, and also slender yet graceful shape of an asymmetrical arched bridge rising graciously over the field. The simplicity of the design is matched by that of the materials: rough-cast concrete and metal handrails.

Although a structure straddling a fairly flattish plot of land, Beautiful Bridge still manages to propose numerous possible uses and appropriations. At one and the same time, it is a belvedere and a promontory affording a new perspective of the landscape, a stage (at the foot of one of the pillars) and steps (able to hold up to 120 people on the deck of the bridge) where shows or performances can be staged and also a place for relaxation, for resting, picnicking or meeting others. Thanks to its location within the “Parc Agro urbain Bernex Confignon” project, Beautiful Bridge is going to benefit from a varied public.

Its asymmetric shape, replicated in an S-shaped path along its base, makes it into an object whose forms change with the viewer’s perspective, like an abstract sculpture delicately deposited in the landscape. Beautiful Bridge thus fulfils a two-fold function. From a distance, it is a work of abstract art, which is gradually transformed as it is passed (in a tram or car) or approached (on foot) into an architectural element, which the residents may appropriate as their own and which participates in the identity and life of the district.

It is a bridge that does not of necessity have to lead from one place to another, but which strives symbolically to bring town and the countryside closer together. 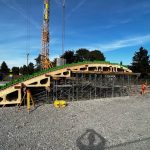 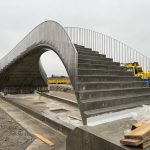